I was feeling inspired. I was going to have just 4 kids for two whole hours and this chance was a perfect one to accomplish the goal of being a little more fun and getting something important done. It was Friday night, and we had a big weekend coming up. Grace’s birthday is on Sunday…but first we had two friend birthday parties for kids to attend. Which means that we needed presents to give to the birthday girls. I had tried to get ideas from my girls as to what their friends might like earlier in the week so I could just pick up gifts while I was out shopping for our own birthday girl. They were having none of it. They wanted to help pick. So that’s where my great plan began.

The plan was to take the kids straight to the store to do some shopping…and, as a way to entise my oldest daugher, who would not be attending any birthday parties, I included a quick stop at the eye glasses store to get her favorite glasses adjusted so they would no longer fall all the way off her face if she moved her head…like even a nod. So we had the destinations. The girls were all in. But that left one more party-less child to convince. And it just so happened that this one was waking up hard from a nap. He was crabby and crying and did NOT want to go. But fate was not in his favor as they frown on leaving 4 year olds unattended at home and so he, too, would get to join the shopping trip. I scooped him up and tried everything I could think of to calm him down. When none of that worked I just threw some shoes on his feet and carried him out to the big van to get buckled in.

He cried the whole way to the store.

My attempts to get him to settle down were pretty unsuccessful. He just didn’t want to be there, and there we were. But you see I had one trick left. Target. Will loves Target. So I had that going for me. I find that it’s best to take 4 kids at a time into stores around 4 oclock in the afternoon because it’s filled with other frustrated parents and whiny kids, so mine wouldn’t attract too much attention, and it just so happened that another kid, throwing a much bigger tantrum got in the cart right next to ours as we arrived. Will was stunned into silence and that was when he turned the corner.

The next struggle was one I could have predicted. Shopping for your friends quickly turns to begging for gifts for yourself. (I mean, one of us may have gotten unnecessarily distracted smelling soy candles at one point so the kids weren’t all to blame.) The girls checked out hair things and necklaces. They showed me which ones they would like best. And Grace quickly got frustrated because none of these things were what her dear friend would love. So then we went to the toy aisles. Here was the part of the shopping where I struggle most. I feel like I’m constantly trying to clear out things from our house that don’t serve a purpose or, for lack of a more original description, spark joy. So when my kids are picking out toys for other kids I am constantly putting myself into the shoes of the other parents and feeling their frustration by the influx of junk they don’t need. So toys were out.

On to the book aisle. While I can’t say this went without a hitch (they had the next book in the Whatever After series that the girls and I are currently reading together) but we did at least find a few possible wins for the friends.

We weren’t quite done. Grace shares a birthday with her best friend. She is convinced that if they found out their great-great-great-great grandparents were somehow related that it would be possible to discover that they were, in fact, twins. No logic I had could dislodge that illusion, so we let it slide, but you can understand why finding the perfect gift for her BFF was so important. We searched high and low. We went from no ideas to 4 (kind of pricey) items in the cart at once, and had to take a few creative detours to talk her back to a more reasonable BFF gift of perfection. (Thankfully the older sisters stepped up with the assist on chosing the final gift.) But we made it. We arrived at the checkout line with successful friend shopping completed and enough time to get glasses adjusted. It was then that the girls mentioned the possibility of Cook Out shakes. They are smart.

I am not a huge junk food person. And the kids don’t really request fast food. But milkshakes are my Kryptonite. I can’t resist them. And if you have had a Cook Out shake you understand the added temptation of the 40-something flavors of heaven. They convinced me. So we navigated the big van through the drive thru and finished the trip with a milkshake.

The truth is, it was not a stress-free excursion. It was a little rowdy. There was a little crying. But my sweet 8 year old looked up at me as we walked out of Target and said “Thanks for letting us get such good gifts for our friends!” and that made it all worth it. Well, that and the milkshake.

I am a college football coach’s wife and a mom to 5 wonderful kids. I try to look for the humor in the midst of the hard and appreciate the adventure! View all posts by Alyssa Tabacca

6 thoughts on “Shaking Things Up on a Friday Night”

Trying to find something?

What have you missed? 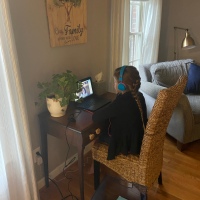